Australian Electoral Roll Indexes, and Who Could Vote

You can do either a name search or an address search in the Australian electoral rolls collection at Findmypast.

More rolls may be added in the future, but right now (UPDATED 13 Jan 2021) Findmypast lists these as available:

Index searches are free. To see transcriptions or images of original records, I recommend either a one-month or twelve-month subscription.

Details below are derived from Electoral Pocketbook (Commonwealth of Australia, 2005).

Queensland has four separate series of electoral enrolment records. Differences and advantages are explained on Queensland Genealogy and Archives Research Tips. (In the future, this page is likely to have the latest updates and links for electoral rolls - eg, the 1969 Commonwealth electoral roll for Queensland.)

This is the address search screen at FindMyPast. 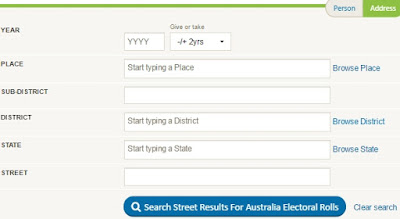 I've seen a case where a man used his real name on State electoral rolls and a completely different name on Commonwealth rolls. I only discovered that after I saw the alias mentioned in his Supreme Court probate file.

In the future, you're likely to find more recent information about electoral rolls in Queensland Genealogy and Archives Research Tips.

New comments are not allowed.