Getting cheaper copies of wills and certificates

I frequently find information about a direct ancestor in records of his/her siblings or other relatives. Genealogists always strive to use original records, but if I cannot afford to buy certificates and wills for all family members, I look for ways to obtain cheaper copies. For specific examples, plus links to articles about 'Free Certificates', 'Postems' and '10 tips', read on!

Record offices often hold copies of wills for people who died in other States or other countries.

Example 1:  Julia WEBSTER died in 1900 at Orange NSW, and her original will went through the Supreme Court in New South Wales - but a copy of her will can be downloaded (free) from the Public Record Office Victoria (PROV). Why is there a copy in Victoria? The explanation is in Julia's will, where she mentions (quote) 'my interest in the estate of my late brother Malcolm John CAMPBELL, late of Newry, Gippsland, in the Colony of Victoria.'

A transcription of Julia's will is also in the New South Wales will books 1800-1952.

Julia WEBSTER, incidentally, was my great-great-grandmother. Because I wanted to see her signature, I made a point of inspecting her original will in New South Wales, not just the transcriptions available in NSW and Victoria; but thanks to the PROV's free downloads, it cost me nothing to get wills and other probate documents for Julia's sister and brothers and many people from other branches of my family tree.


Example 2: Queensland State Archives have a probate file for Ellis READ, who spent a lot of time in England but died in Mexico in 1890. Ten years later his widow applied for administration of his estate. He owned land at Burketown in Queensland, and when it was sold, a grant of probate was required so that a certificate of title could be issued. The file includes details from Ellis's death certificate from Mexico (his age, native place, occupation, wife's maiden name, father's name, mother's maiden name, and his cause of death and burial place).

Some early probate files for Queensland are available on microfilm through Church of Latter-Day Saints Family History centres - but a word of warning...

The old 'card index' listed in FamilySearch had a huge number of mistakes, so you should use the new (corrected) index to Supreme Court wills on the Queensland State Archives Web site. Note that it only covers the 'ecclesiastical files' series. Many other wills are in the 'Intestacies' series (Supreme Court Public Curator orders and elections). There is an explanation of this in Tips for Queensland Research.

Have you succeeded in getting cheaper copies of wills or certificates by these or other methods?
~ ~ ~
© Copyright, Judy Webster - 13:27 0 comments

Tips on Using FindMyPast for Genealogy

Yesterday, in FindMyPast or a Coffee?, I pointed out that some FindMyPast subscriptions only cost about $5 per month (not much more than a takeaway coffee).

Kylie commented, 'I got a world subscription through FindMyPast.com, the USA site, because it was cheaper at the time than the Australian and the UK sites. I don't seem to get the same search results as if I searched from their Australian site or their UK site.'

I am not an expert, and FindMyPast may change in the future, but here are my thoughts.

* Some of the United Kingdom data may not yet be fully integrated into the World Collection. In that case the UK data would be best searched through the UK site or the Aus/NZ site. Work systematically through the UK record categories rather than trying to search everything at once (a tip I learnt from Rosemary Kopittke.)

* I have sometimes found a particular entry with a search on one site (eg, Aus/NZ) but not another (eg, UK). When I noted the country, collection and record set, then went to that country's site and that record set, I always found the entry even though it didn't appear in the initial search results.

* Different search strategies are required with fully indexed records (where you use name fields to search) and digitised records that have been processed with Optical Character Recognition software (where the keyword field is important). This applies particularly to the Aus/NZ site. There is a good explanation in the book The New Findmypast.com.au: Gateway to the World Collection, by Rosemary Kopittke.

* Tips on how to best use FindMyPast.com.au:

* At Rosemary Kopittke's talks about FindMyPast (eg, at Unlock The Past events), you often get an excellent handout explaining search strategies for each site (not just the Aus/NZ one).

If you have any helpful hints about using FindMyPast, please add a comment below.
© Copyright, Judy Webster - 10:35 0 comments

FindMyPast or a Coffee?

I recently wrote about why I like using FindMyPast. My world subscription is through their UK site, but I have also registered (free) with the Australia / NZ site because I want to receive their newsletter. (In 'My account - Personal details', tick the box beside 'Please send me an occasional newsletter'.)

The newsletter often has competitions and special offers (discounts, free pay-as-you-go credits, etc). Today's newsletter offered 20% off subscriptions if you join by 30 Nov 2013.

Not sure whether they have records that will be useful to you? Have a look at the full list (worldwide). More datasets are added each month. Note the inclusion of the British Newspaper Archive and various other digitised newspapers.

If you are thinking about getting a FindMyPast subscription (or if you already have one), see my tips on using FindMyPast for genealogy.
© Copyright, Judy Webster - 10:58 2 comments

Biographical details of more than 16,000 people, many of them from overseas and other Australian States, are in these three series of historical records at Queensland State Archives - and the names and exact source references are now on FindMyPast.


The hospital records usually give details similar to those on a (very informative) Queensland death certificate, plus ship of arrival, place of residence, marital status, father's present residence, and sometimes other information that is very useful for family history. Details provided by a patient at the time of admission are usually more accurate than those on a death certificate.

During the early years of the Croydon gold rush, 70% of patients admitted to the local hospital were born in Britain or Ireland, and about 15% were born in Australia's southern states, especially the Victorian gold-fields.

The old age pension records give information about people who received the pension and also those who were rejected. These registers give the place of residence of many people who were not on electoral rolls, including some who were not British subjects, not naturalised and thus not eligible to vote.

My Web site lists (on separate pages) the names from these three indexes. You may find it more convenient to search or scroll through all 16,200 names in a combined alphabetical list.

If you use FindMyPast to get exact source references, you can personally inspect the original documents at the Archives, or order a copy.

You may be surprised at what you find in these records, which have allowed many people to make rapid progress with their family history. Even if you are not aware of a Queensland connection, I urge you to check the indexes.

Revenue from ads goes to Kiva

A few days ago, in False Identity and other Eureka Moments in Family History, I mentioned my article (published in Inside History magazine) about 19th century immigrants to Australia who travelled using false identities.

Today I received an email that stunned and delighted me. It said,


You came to Coffs Harbour and gave us a talk some time ago... I have just read your article in Inside History regarding John and Peter Anderson travelling under false names on the Hannah Landels. John Anderson is my great grandfather... I have searched and searched and had the Oxley Library and others in Queensland look for me and we couldn't find them on the passenger list.

The chances of a descendant reading that article must surely have been very small - and yet it happened, and the descendant is someone I've met. This is just amazing - and, for that descendant, a big Eureka moment!
© Copyright, Judy Webster - 19:20 6 comments

False Identity and other Eureka moments in Family History 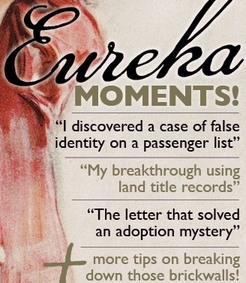 The theme of the latest edition of Inside History magazine (always a good read) is 'Eureka' moments: breaking down brick walls in family history. It includes my article about 19th century immigrants to Australia who travelled using false identities.

Inside History, with features on social history and heritage and in-depth family history research advice, is Australia's leading bi-monthly magazine for people passionate about the past. The latest edition (Jul/Aug 2013) "throws the spotlight on shipping records and a case of false identity that will have you looking at 19th-century passenger lists in a new light". It also looks at how land title records in Queensland led to the discovery of a cache of 300 family photographs; and it describes how transcribing an old letter led one reader to solve an adoption mystery from the 1930s.

These are many other fascinating and informative articles in this edition. Experts help to date and identify family photographs. Read about the scandalous dances held in 1920s Sydney, and the anniversary of HMAS Australia, our first Navy flagship. There are book reviews, a travel feature on genealogy cruising, and a look at families in British India. Blogs have provided many research breakthroughs and Eureka moments for family historians, and this issue lists Inside History's Top 50 Genealogy Blogs 2013.
~ ~
P.S.  Inside History did not publish the original source reference, which is 'Qld State Archives item ID 847100, COL/A369, 83/4753' (a Colonial Secretary's Office in-letter). A few days after I wrote this, there was a truly amazing sequel. Read about it in Genealogy Serendipity and the False Identity story.
~ ~
Inside History is available in some public libraries. 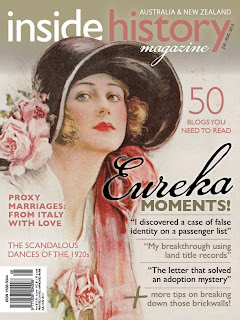 
A Web page that I use regularly is the full list of Australian and New Zealand records on FindMyPast. One of their latest additions is an index to Wallangarra quarantine admission registers 1918-1919.

The influenza pandemic of 1918-1920 killed millions of people (between 3% and 5% of the world's population at that time). To reduce the spread of this highly contagious disease, people entering Queensland for the first time, or returning from interstate, were detained in quarantine camps at Wallangarra on the Queensland/NSW border.

Queensland State Archives hold admission registers for those camps. Information in the database at FindMyPast includes name, year, marital status, occupation, address, what date the person left Queensland (if applicable), and the camp number and Archives reference. The original registers have extra details such as remarks and signatures.

There are many reasons why someone could have been travelling between NSW and Queensland, so check whether any of your family are listed in Wallangarra quarantine registers.
© Copyright, Judy Webster - 17:59 0 comments